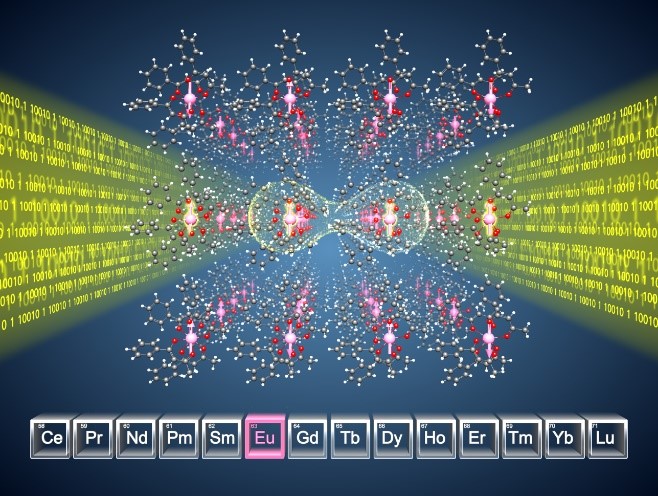 Published in Nature 2022 we present a mononuclear Europium (III) complex, in which the nuclear spins can be read-out and manipulated by photons forming an effective photon-spin interface with potential for distributed quantum computing. 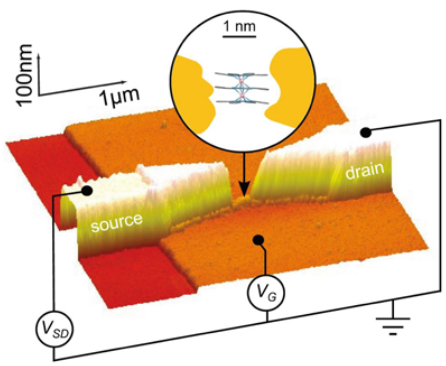 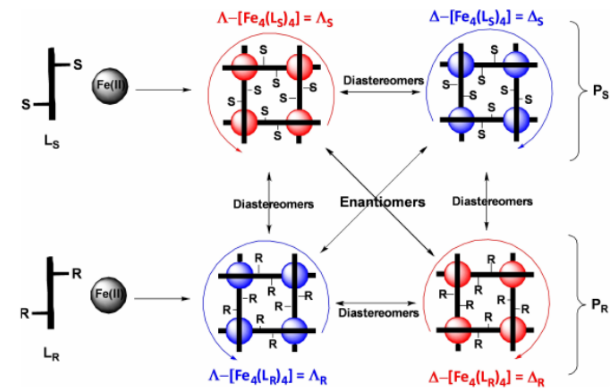 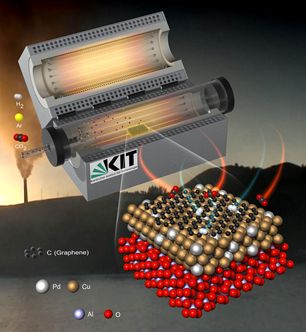 Nature Chemistry 2018 reports how starting from a single precursor,featuring asymmetry both in geometry and reactivity, the rare semiregular (3.4.6.4) Archimedean Tiling with long-range is formed in a multistep approach. 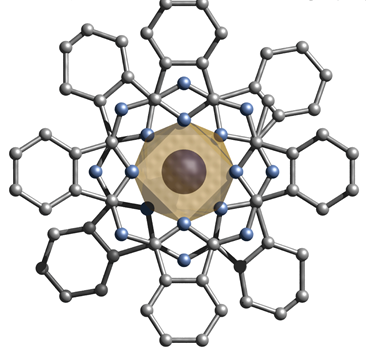 The synthesis of the two isotopologues of 163DyPc2 and 164DyPc2 featuring different magnetic properties is reported in Angewandte Chemie 2017. 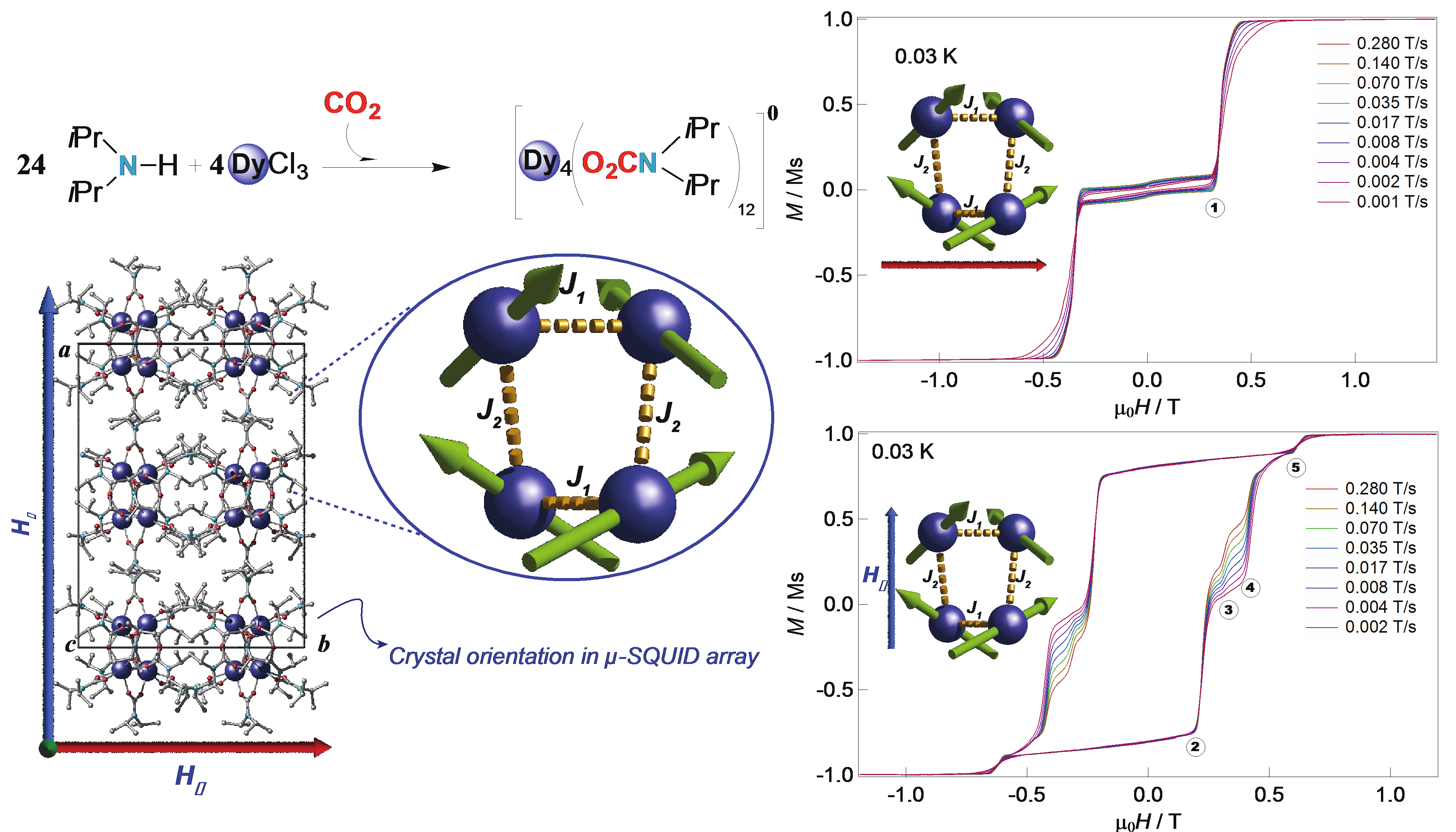 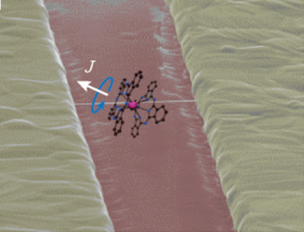 As reported in Nature Comms 2016 the Einsteinde Haas effect at the quantum level has been demonstrated using a single-molecule magnet attached to a carbon nanotube mechanical nanoresonator. Press Nature Physics

A communication in Angew. Chem. Int. Ed. 2016 reports how tautomerism of a homoditopic ligand leads during Fe(II) metal ion coordination to the emergence of both diversity and complexity from the molecular level. Divergent Coordination Chemistry is featured by two, in parallel synthesized tauto-isomeric Fe(II)4L4 tetramers differing strongly in their magnetic properties. Cover 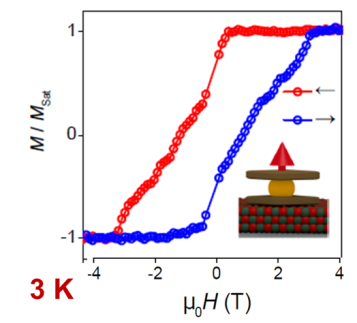 An article in Nano Lett. 2015 a rational design approach to customize the spin texture of surface states of a topological insulator (TI) Bi2Se3. For the rational design we use theoretical calculations to guide the choice and chemical synthesis of appropriate molecules that customize the spin texture of Bi2Se3. These tailored interface propertiespassivation, spin-texture tuning, and creation of hybrid interface stateslay a solid foundation for interface-assisted molecular spintronics in spin-textured materials. 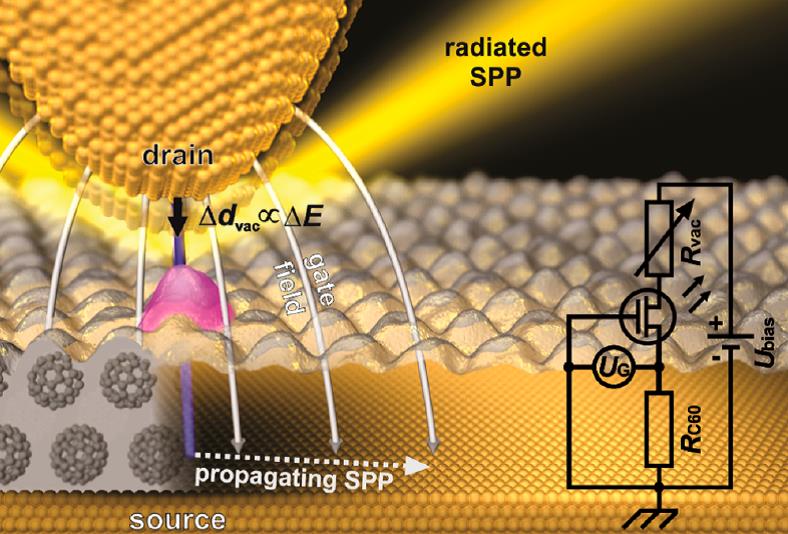 Controlling light at the nanoscale by electrical fields requires objects, in which electro-magnetic properties are responsive to gating fields. In two recent publications it was shown that molecules fulfil this requirement and act as such quantum transducers. This article was presented as research highlight in Nature Photonics. To read more see Nano Letters 2013 and Nano Letters 2014. Press Nature Photonics 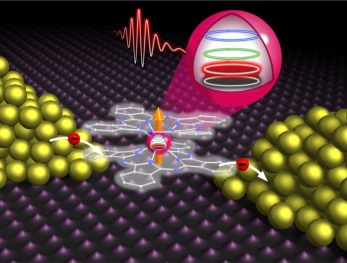 A recent publication in Science shows how coherent single nuclear-spin manipulation using electric fields only can be achieved. This quantum-mechanical process is present in all nuclear spin systems and uses of the hyperfine Stark effect as a magnetic field transducer at the atomic level. To read more see Science

For the first time nuclear spin states could be read out electronically by integrating single quantum magnets into circuits (in collaboration with W. Wernsdorfer). Long nuclear spin lifetimes (tens of seconds) and exceptional relaxation characteristics at the single-atom scale open the way to a completely new device world, into which quantum logics may be implemented. Nature. Press Nature Nanotech.

In collaboration with the group of R. Wiesendanger, the first direct real-space images of spin-split MOs at a TbPc2-Co(111) spinterface were reported in Nature Comms

The first demonstration of a fully functional spintronics device that is entirely made of molecular materials is reported in two publications Nature Materials and Nano Lett, More...
Press.

The research activity at the research unit "Molecular Materials" at the Karlsruhe Institute of Technology is oriented towards the design of functional nanosystems by state-of-the-art organic/inorganic synthesis and supramolecular self-assembly techniques for their implementation and integration into devices.


Video: Coherent spin-photon interfaces. Light can be used to operate quantum information processing systems, e.g. quantum computers, quickly and efficiently. We have developed molecule-based materials suitable for use as light-addressable fundamental quantum units. By demonstrating for the first time light-induced spin polarization in the europium(III) molecule, we have succeeded in taking a promising step towards the development of quantum computing architectures based on rare-earth ion-containing molecules.

Video: Operating Quantum States in the Single Molecule Magnet of TbPc2. The long way to the successful implementation of Grovers Quantum Algorithm for a quadratically accelerated search of an element in an unsorted data base, is described in the review. Andrea Morello presented this article in the news and views section in Nature Nanotech.

The spin associated with the single-molecule magnet is then subject to conservation of total angular momentum and energy, when attached to a CNT-mechanical nanoresonator.


Video: The observed long spin coherence life times concomitant with low-invasively electronic addressing, read out, and manipulation allow for the integration of magnetic molecules into electronic circuits and for the implementation of a quantum algorithms. Thus, metal complexes molecules show the potential to set the stage, in near future, to the novel class of quantum bits, the Molecular Spin QuBits.

The vision of the research group is to develop new concepts and advance research tools to master the design and the characterisation of molecular structures as well as their implementation and integration within the nanometer-regime. Towards this end, the group is highly integrated into several interdisciplinary collaborations and is directing several interdisciplinary European network projects 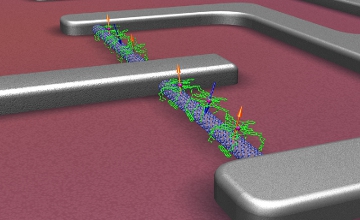 Breakthrough experiments have been carried out by the group targeting the self-assembly of spintronic devices. Supramolecular techniques were used to position magnetic molecules in defined device environments where single-spin addressing leads to the observation of magnetoresistive effects. The demonstrated possibility of manipulating spins at the single molecule limit opens a completely new world to Supramolecular Spintronic Devices, where memory, logic and possibly quantum logic may be integrated.

Molecules can be considered as physical Quantum Objects. The use of molecular materials represents the advantage that the active quantum processing elements consist of an atomic core of one-to-few open spin ions surrounded by a shell of organic material. At low temperature such molecular spin objects behave as simple, few-level systems and their spin degree of freedom can be sufficiently decoupled from the environment to achieve long decoherence times and making them to ideal candidates for the implementation of qubits. The first example of such successful realization of Molecular Quantum Spintronics, the completely electronic read out of a nuclear spin of a lanthanide ion (bearing electron and nuclear spins) embedded in a molecule (TbPc2), was recently reported in Nature. Herre van der Zant presented this article in the news and views section in Nature Nanotech.

The self-assembly of surface-confined molecular motors from simple molecular building blocks was reported in the Proceedings of the National Academy of Sciences (PNAS, in collaboration with J.V. Barth, TU München) More....

An article in Nature Chemistry reports on the random reticulation of a metal surface by divergent coordination assembly expressing string formation and bifurcation motifs. More....

The confinement of surface-state electrons is possible using weak -interactions of aromatic molecules with metallic surfaces. The results obtained in collaboration with the group of J. V. Barth (TU Munich) demonstrate the engineering of ensembles of elaborate quantum resonance states by molecular self-assembly. More...

A Ruthenium(II)-polypyridine complex exhibiting high quantum yields under ambient conditions was obtained by the expansion of the tpy coordination cage. More.....

The report on the nanostructuring of switchable iron (II) spin transition compounds by soft lithography techniques (in collaboration with M. Cavallini, CNR Bologna) was highlighted as "Hot Paper" in Angewandte Chemie. More... Press...

The spin dynamics of a [TbPc2]-1-SMM was probed by solid-state 1H NMR techniques. The magnetic anisotropy barrier was found to be one order of magnitude larger than in any other SMM system (584 cm-1 - 641 cm-1). More ...

Transport through a Single Metal Ion

In collaboration with IBM, our group succeeded to study the electron transport through a single Ru(tpy)2-molecule. It was shown that the transport occurs in the resonant tunnelling regime and the ruthenium(II) metal ion behaves like the cross shaft in a Cardan-joint. More...